It’s a sad time for Stand Up For Siblings (SUFS) as we say farewell to our founder and inspiration – Dr Christine Jones.

It is fitting that Chris’s last week with SUFS is the one in which the new laws to respect brothers and sisters’ rights to family life come into force in Scotland. Without Chris, there would be no SUFS and it is very unlikely that rights of brothers and sisters in care would now be explicitly protected and promoted in law.

This story starts in August 2014 when Chris made a successful application for a research grant. The research began in early 2015, and centred around the estrangement from brothers and sisters in the care journeys of 50 children. There were also interviews with young people and families who had experience of permanence and adoption.

This was the first research on brothers and sisters in care in Scotland to be undertaken since Marjut Kosonen’s important PhD research in 2001, and what it found was significant[1]

Chris was determined that this research evidence would lead to change. In 2016 and 2017, she worked tirelessly across the public, third and legal sectors to promote the research findings and their implications for children in care in Scotland. And in September 2017, Chris brought together a range of like-minded organisations[2] that became the partnership that is SUFS.

Stand Up For Siblings was officially launched on 9th March 2018 with an event and its own website.  Not only had Chris secured the support of the Children & Young People’s Commissioner for Scotland and the Chair of the Independent Care Review, Scotland’s First Minister also stated her support for SUFS and what we wanted to achieve. Only two months later, the Scottish Government started a consultation on changes to the law on children in care.

Then on first anniversary of its launch, SUFS secured a commitment from the Scottish Government for the law to be strengthened:  ‘to keep children together where it is in their best interests to do so, and … to promote a child’s contact and personal relations with their brothers and sisters…’

Chris devised the seven steps to achieve the changes needed to support the sibling relationships of children in care, these are:

These seven steps form the foundation of all SUFS work. They provided inspiration for the Independent Care Review and are reflected in The Promise.

Chris’s achievement is immense.  She brought together the disparate group of organisations that is SUFS and, with no funding, successfully influenced practice and the law so that the sibling relationships of children in care will be fully considered in decision making and are supported.  These changes mean we should soon see far fewer brothers and sisters separated and these relationships given far greater priority and consideration in all decision making for children in care.  What this means for thousands of Scotland’s children is immeasurable.

SUFS is determined to continue Chris’s work and there is still much to do.  Our attention will be on making sure the legal changes happen soon in practice, and that The Promise is realised in full.  We will continue to push for change to achieve Chris’s vision for all brothers and sisters in care.

What Chris means to SUFS partners:

For me, working alongside Chris as part of SUFS has been just a joy, and has taught me a great deal about partnership. Chris’ warmth and down to earth character, together with her passion, wisdom, research skills and knowledge are just the perfect recipe for progressing positive change for brothers and sisters with experience of care. Chris is so inclusive, welcoming and values everyone’s contributions, and always ensures the important messages are held and heard by those who need to hear them. I will greatly miss working with her.

I would really like to comment on how alone we felt at STAR before Chris approached us about her plan for SUFS, mountains are so much easier to climb when you do it together 😊

Chris is a remarkable lady in every way and I will personally miss her very much. I want to wish Chris all the best in her retirement.

It has been an honour for me to work with Chris, and I will very much miss her.  It is very rare that research makes such an impact, and this is all down to Chris.  She is a force for good. I wish her and her family every happiness.

It’s been a privilege to work with Chris and appreciate very much her quiet leadership, dedication and powers of persuasion. The reach we have been able to have as Stand Up for Siblings has in no small way been thanks to Chris bringing together many different organisations and people who all want to achieve the same goal and Chris easing the path for getting on board.

Chris has been a huge inspiration to me over the past years and I feel privileged to have been a part of the journey she has steered us on. I will always be in awe of her commitment, enthusiasm and passion for driving forward conversations to ensure we remember and prioritise the importance of the relationships between brothers and sisters, and her knowledge and wisdom will be very much missed.  Wishing Chris every happiness for the future.

I feel very privileged to have known Chris and be welcomed in to the SUFS fold. Chris has been an inspiration to me and my fellow SUFS members, she has been the driving force behind the movement, the ‘glue’ which has kept us together and focussed on the shared aim of achieving recognition in society and in legislation for the rights of children and young people. I wish Chris well in her future endeavours and I am certain that SUFS will continue to honour her in their continued work to bring about positive outcomes for children, young people and their families in Scotland.

‘Where there’s a will there’s a way’. I can think of no one whose personal example, leadership and contribution to improving the lives of children in need of  care and protection better epitomises those wise words than Chris Jones. It is not only the stunning achievement from start up to legislative change in four years, but the person and their leadership style which must be recognised. No budget, no ‘official’ locus, and yet key children’s organisations across Scotland joined on voluntarily offering human and practical resource to support and help. Always kind, compassionate and authentic, unwavering  determination and a wonderful impatience for improvement – even at our very last SUFS meeting with Chris at the helm  – ‘what can we do NOW?’ Procrastinators catch up when you can!

Chris, you leave us with a vibrant, determined and pragmatic movement for good to keep building on, with the needs and voices of children and the relationships that are important to them growing the change and now enshrined in law. Thank you. 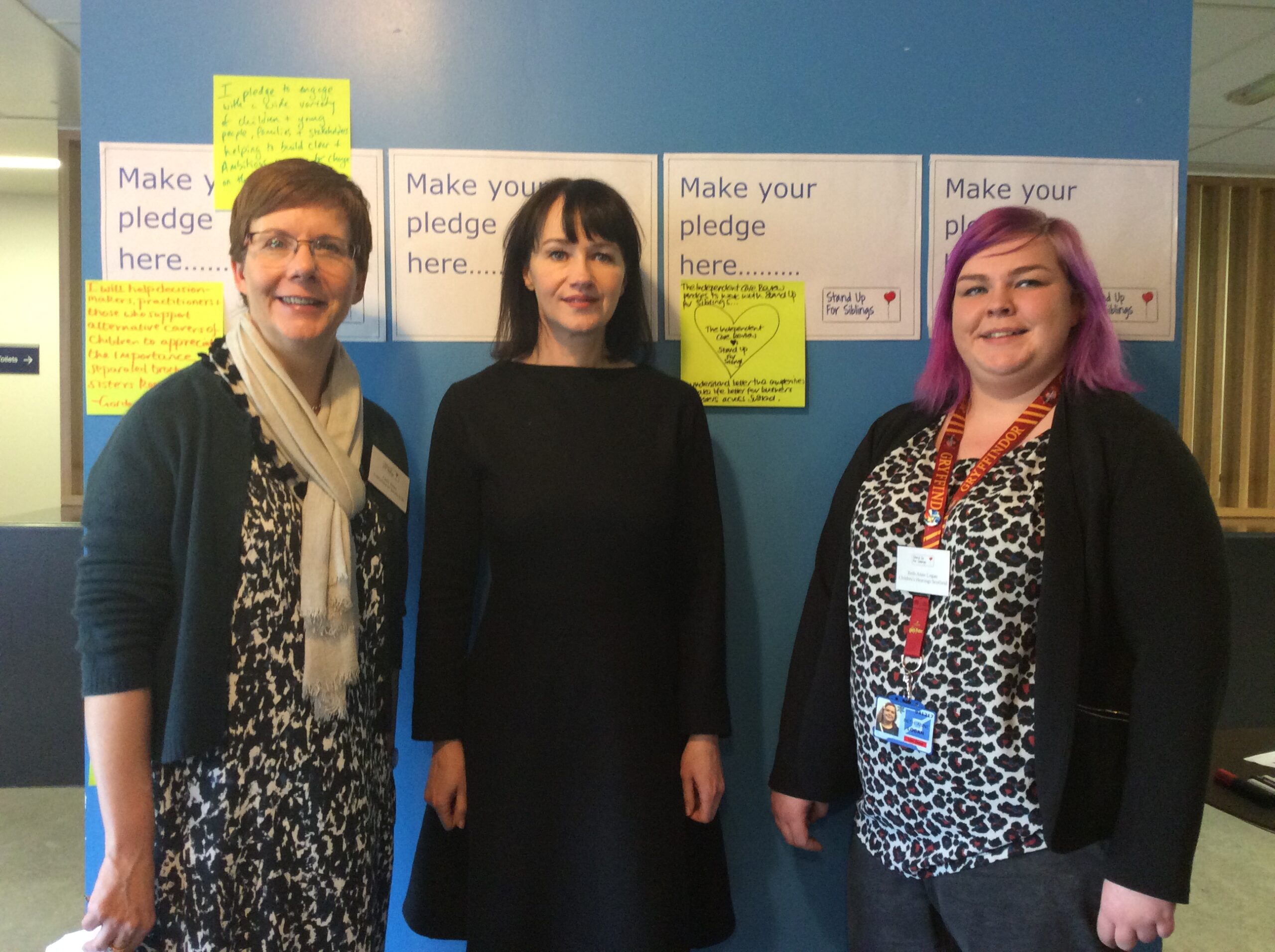 Chris, pictured left, at the official launch of Stand Up For Siblings in March 2018 with Fiona Duncan and Beth Anne Logan.